This archive contains a set of 32-bit mouse pointers that may be used with AmigaOS 4.1.x

I'm not a huge fan of the red and white set that comes standard with AmigaOS 4.1. In fact, I have been using the same "Mac style" pointer (originally found on Aminet) on both my AmigaOne and A1200 for over 15 years.

I scoured the Internet to find a new set to use. Most free Windows pointers (or "cursors") are extraordinarily ugly, but I found some I liked. It seems AmigaOS supports more pointers than Windows, so I had to adapt the original set to make up the shortfall.

The original set I worked on was created by Virum64, and was itself based upon the original WindowsXP "cursors".

1. If you are already using a set of def_pointers, I recommend you back these up by creating a drawer in SYS:Storage/ and copying them there.

2. Copy the def_#? files into envarc:sys/ . **This will over-write any pointers already there, so I recommend the back-up procedure outlined above**

3. (Soft) Reboot OS4 (it is not necessary to reboot the machine)

The original pointers were created by Virum64 and found here: http://www.rw-designer.com/cursor-set/modern-windows-xp

"Copy" and "Drag and Drop" incorporates images made by HaKaSuKe and found here: http://www.rw-designer.com/cursor-set/hakasuke-new-style

This set was adapted by myself, as per the licencing agreement found here: http://www.rw-designer.com/licenses

The PNG images were converted to icons with Stephan Rupprecht's Image2Icon

Most of the reworking was done with PEB's IconEditor

Some touch-ups were done with Art Effect 4.0

Finally, the standard IconEdit was used to identify hot spots, as it's the only Icon Editor that shows co-ordinates!

The Help pointer has been redesigned to more closely match the standard pointer. icon_#? files added. A few other minor tweaks...

I'm definitely no artist, so some of the images could be much better. Cell, Hand and ZoomIn/Out could all be redone 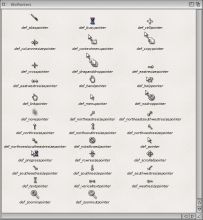